So because I have been at home, housebound because of illness and experiencing cabin fever, I once again cracked open the Goldilocks Bakebook and baked something familiar and comforting.  I made ensaymada.  It’s a sort of soft brioche-y type of bread that’s slathered with creamed butter, slightly sugared and smothered with cheese.

And just like that I am comforted.  The recipe needs tweaking because the dough was unbelievably wet!  I’m going look up other ensaymada recipes and see where improvements can be made.  I am thankful for the ability to bring Manila to me…even if it was through several cheesy-buttery-bready mouthfuls!  What can I say – baking is like medicine! 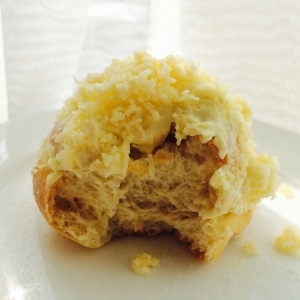 Since late Saturday night I have had a constant companion.

Nope, am not talking about Alan.  I wouldn’t mind having Alan around all the time at all!  If anything, if he wasn’t around I don’t think I’d have survived the last few days.  I’ve been visited by quite a mean migraine.  It started late Saturday night.  I didn’t really think of it as a migraine, as such.  I thought it was just a headache.  I thought that if I went to bed, it would go by the time I woke up on Sunday.  No such thing happened!

I woke up with a stonking-make-me-cry-buckets-like-a-baby headache.  I moved, my headache pounded.  I shifted, I felt nauseated.  Even a faraway neighbour’s dog barking was causing me torturous pain!  Everything looked intensely bright, like everything was a huge, over-exposed photograph.  I felt like my head was going to explode!  I blubbered whilst I was talking to my parents and sister, occasionally asking them not to talk to loudly (I don’t think they were talking too loud though).  So finally, I took massively strong pain killers and burrowed under the duvet and slept.  I woke up nearly 3 hours later feeling like my head had been hit by a sledgehammer then wrapped in a turban.  I was not well.

I stupidly thought that I would be able to manage work on Monday.  I pushed myself, despite the throbbing head, to finish an entire day of work.  I went home barely able to make it up the steps without crying out for someone to carry me up to the train platform.  For the first time in a very long time, I actually enjoyed sitting in the cold wind because the cold helped ease my headache!  But I got home and I was a useless shell of a human being (I probably wasn’t but I certainly felt like it!  I felt absolutely spent!).  I didn’t go to work the following day and then took myself off to the doctors’ to get checked.

I got signed off from work for a week, but did I stay home?  Nooooo!  I got up the following day, got ready for work despite the massive headache and took the hour-long train ride to work because my sick note said “until migraine settles” and I thought that if I worked, my migraine would settle.  But I got sent home!  Mostly because I was signed off and wasn’t fit to work and my firm wasn’t insured in case anything happened to me at work on account of my current state of unfitness.

Fast forward 48 hours and I am climbing the walls a tiny bit bored.  It’s weird because I can definitely say I feel much better because my headache isn’t as bad, but it hasn’t left.  My head doesn’t feel like it’s going to explode anytime soon though.  That’s a vast improvement!

I have my fingers crossed that I am going to get better soon.  I am a bit tired of this headache…and a bit annoyed with it now.