We went back to St Ermin’s today to enjoy afternoon tea again and, in the process managed to avoid the hail that pelted London for a about 10 minutes.  That was lucky!  We could hear it from where we were seated in the Tea Lounge.  We were in a corner furthest from the windows and doors but we could still hear the noise.  I don’t know if I’ve ever written about it but I have this weird preoccupation about precipitation.  I hear rain, I need to see it.  I see snow coming down and I have to run to the nearest window to see the flakes floating down (yep, I’m very odd like that).  But this afternoon, I was well-behaved and stayed in my seat. 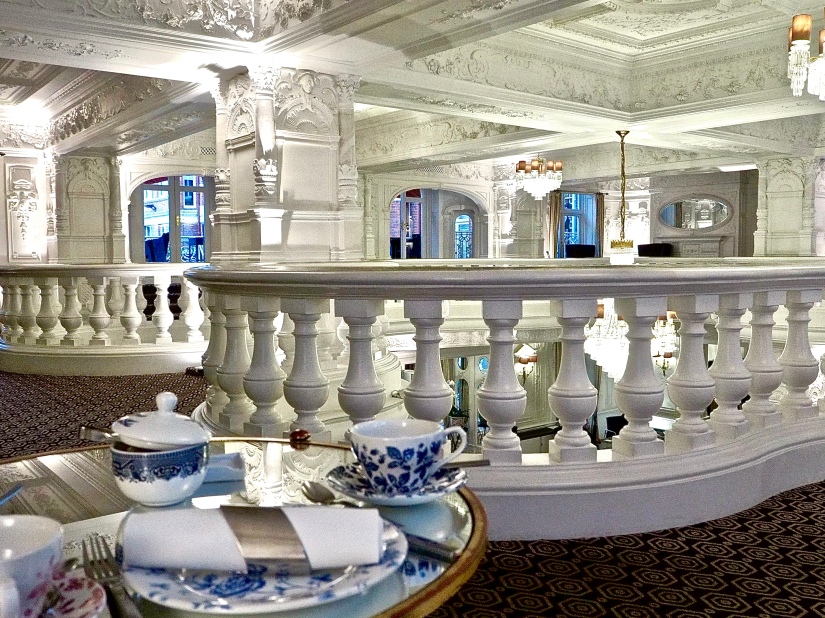 The afternoon tea was as lovely as I remembered.  This was the second time we’d had afternoon tea in St Ermin’s so we knew that we could change the savoury and sweet elements of the afternoon tea.  We chose our tea, asked for our favourites and waited.  If you do want to enjoy afternoon tea in beautiful surroundings, without having to pay through the nose and having to adhere to strict dress codes (obviously common sense dictates that you do dress accordingly), try afternoon tea at St Ermin’s.  The food is lovely, the teas are amazing, but most importantly, the staff are friendly and oh-s0-very-helpful!

Anyway, after the lovely food and the even more delicious tea, my klutzy self chose to make an utterly flamboyant reappearance!  As we were walking from the Tea Lounge to go and pay the St Ermin’s bees a visit (the hotel keeps bees and gives the honey produced in cute little pots to their guests), I managed to miss a step and fall on my left arm and smash my head on a wall with a loud bang.  I’m sure it was caught on St Ermin’s CCTV, so at least my embarrassment would only be witnessed by whoever was manning the security cameras and there wasn’t anyone else except Alan to witness my epic fall from grace!  I say epic because it felt like the worst expression of klutziness in my personal history, ever.  Everything felt like it was happening in slow motion but at the same time it felt like it was over in a flash and I was left to enjoy the starts after my head hit the wall.  Even Alan said he thought it happened so slowly that he thought I would be able to stop my head from hitting the wall.  Evidently, I didn’t because, even to me, the sound of my head making contact with the wall was very loud.  I am only thankful that it wasn’t a concrete wall or it had some sort of wooden panelling.  Otherwise, I wouldn’t be sitting at home with only a sore head and bruised arms and a dreadfully damaged ego.  I am so thankful for small mercies!

On the way home, because it was Chinese New Year, I read my Chinese horoscope (I’m not necessarily superstitions but I do find it entertaining reading) and it says, that health-wise, for Dragons “Due to the existence of the inauspicious star Tiane (天厄), you will hardly maintain the stable health in 2017. To be simple, you may easily have minor illness or disaster, and suffer lingering cold or fever…” – lingering cold, check; minor disaster, fall and bang on the head today, check!  I’ve never had my horoscope, Chinese or otherwise, be this spookily accurate!

My head is still sore, and the left side of my body feels bruised.  I can’t seem to straighten my left arm but I think this is because my arm took the brunt of the impact of my fall.  I’ve had people say that I need to get checked out by a medical professional just to make sure I’m okay.  I will…if anything completely out of the ordinary happens.  But I am just mostly bruised so I don’t think I need to see a doctor…but I am keeping an open mind and am listening to my body.

Be careful everyone!  Watch where you step!

Originally published in my other blog Panasian Kitchen

We heard about Billy and Chicks via social media and wanted to try it.  We’d heard a lot of good things and as we love southern fried chicken we were very curious about how their chicken tasted.  We also found a Timeout voucher online that pretty much sweetened the deal for us (£5 for 2 pieces of chicken, chips and a drink – absolute steal!).  But if you find the voucher on Timeout, make sure you read the fine print because you can’t use the voucher on Fridays.

So armed with our Timeout vouchers, on a rainy Thursday, we headed to Billy and the Chicks.  If you’re going to Soho Theatre, this is a convenient place for a pre- or post-theatre meal as it’s just around the corner.  But be warned that it is a very popular place for cocktails in the evenings so you have to expect a bit of a crush.  Lunchtimes are quieter as most of the punters tend to take their food away to go back to their offices.  Anyhow, we were seated as soon as we came in (we came at 12 noon and the place was virtually empty).  The staff are lovely and while they don’t hover over you, don’t hesitate to ask your questions because they’re really friendly and they know their food.  We presented our vouchers and were asked what we wanted to drink.  TOP TIP: If you get there early enough (just after 12 noon), you can choose what part of the chicken you want, i.e. breast, wing, thigh, or drumstick, because no one else has ordered and you can have your favourite chicken piece. 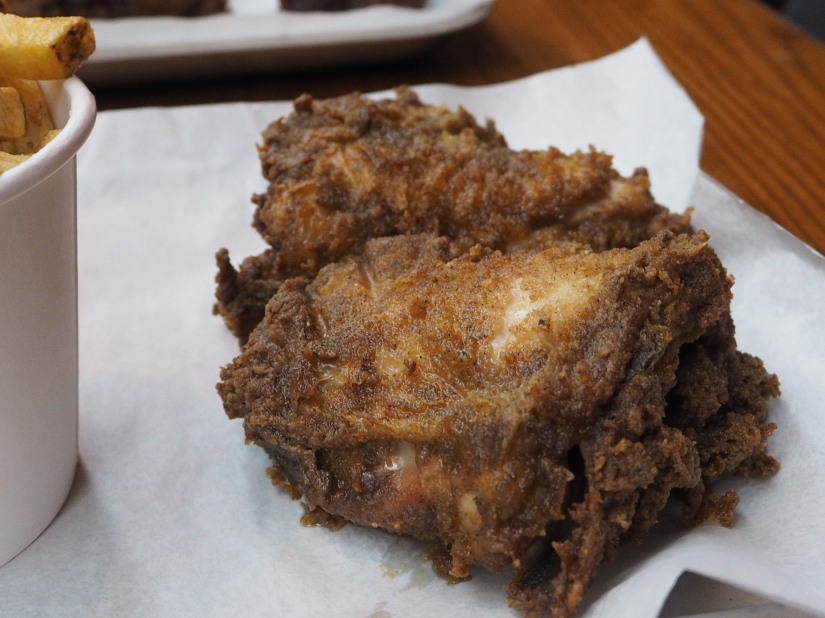 The Timeout vouchers are an absolute deal because Billy and the Chicks are very generous with their chips (skin on potato fries that are almost chip shop like, crispy-crunchy on the outside and fluffy on the inside! YUM!).  I would think one serving of chips would be enough to share between 2 people or one very hungry (heavy on the very) person. 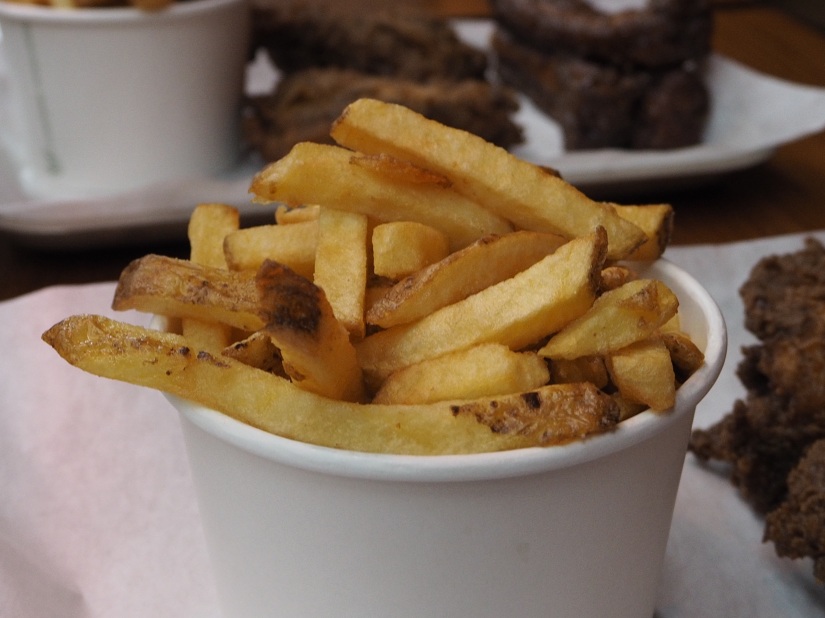 The chicken was amazing.  The spice mix reminded me of how KFC tasted like when I was a kid.  It was very reminiscent of KFC in the late 80s.  The chicken is succulent and the flavour isn’t confined to just the breading and crunchy coating on the skin, it permeates through to the flesh.  When you cut into the chicken, you see how succulent it is because the liquid that comes out isn’t oil but juice…lots of it!  This is quite easily one of the best fried chicken I’ve had in the Big Smoke. 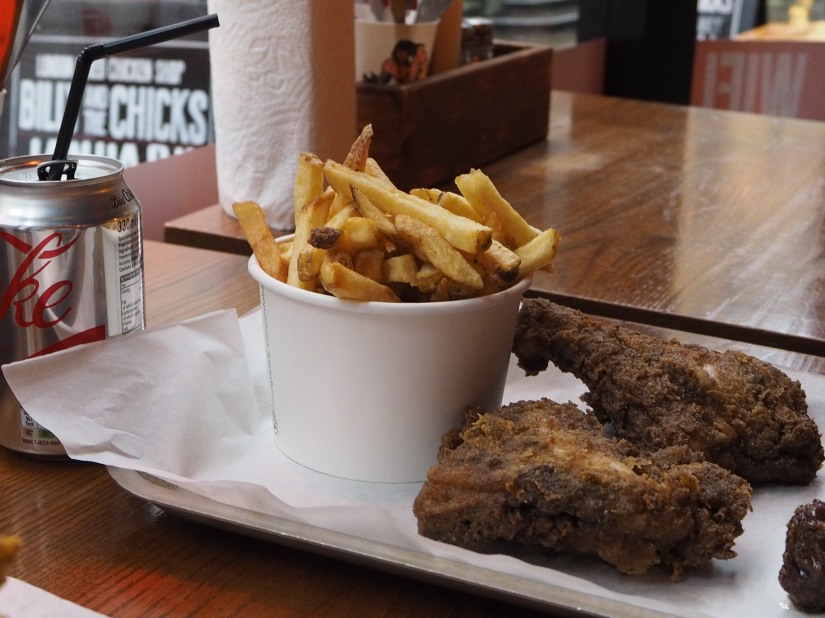 We also tried the ribs which were okay.  The sweet-sour flavour of the ribs was interesting enough to make it stand out slightly from other pure ribs that you could get from fast food places.  The ribs aren’t mind-blowingly amazing, but they are okay and worth the try.  I loved the tangy-ness of the glaze.

The menu is not huge but what they had on there was very complimentary to each other.  I was also quite pleased that they served gravy as a side.  I’m not quite sure why, but gravy doesn’t seem to feature in a lot of places that specialise in American-style fried chicken. I haven’t tried their gravy though.  But judging from the comments coming from the Australian group sitting at the next table, the gravy was really good.  They each ordered their own gravy sides.  They said they didn’t want to share!  That’s for next time…because I am going back. The chicken is really good and I am so looking forward to going back! 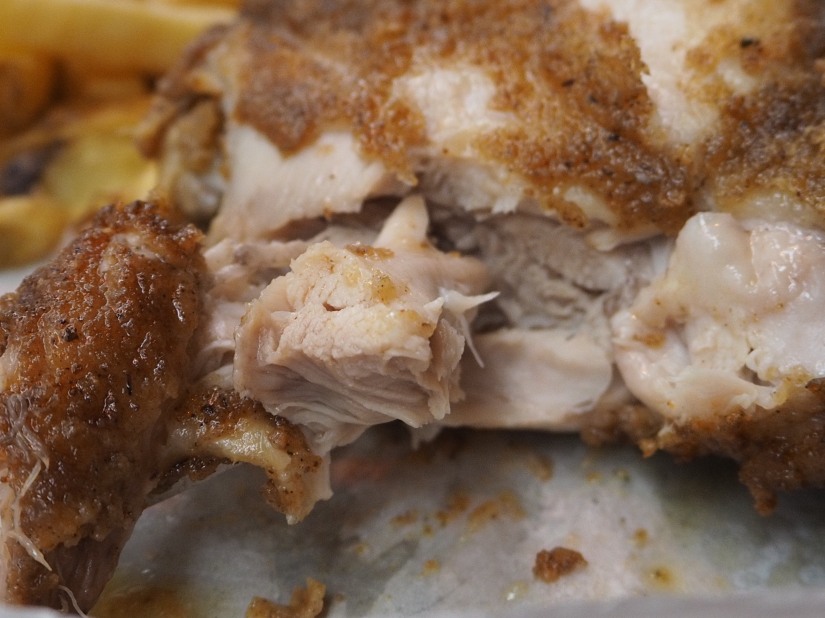 The restaurant space is interesting.  There are a lot of interesting photos everywhere – even a mural of Queen Victoria eating a drumstick!   I would have wanted it to be lit a bit brighter though.  We sat near the large front windows so we could see our food.

I enjoyed my eating experience because apart from the food nostalgia, the music was, for lack of a better description, very cool.  All the music reminded me of the rap and hip hop music that I liked (mostly songs that were in the soundtrack of Save the Last Dance!) when I was growing up.  There is a large DJ booth in the corner which convinces me they take their music seriously! 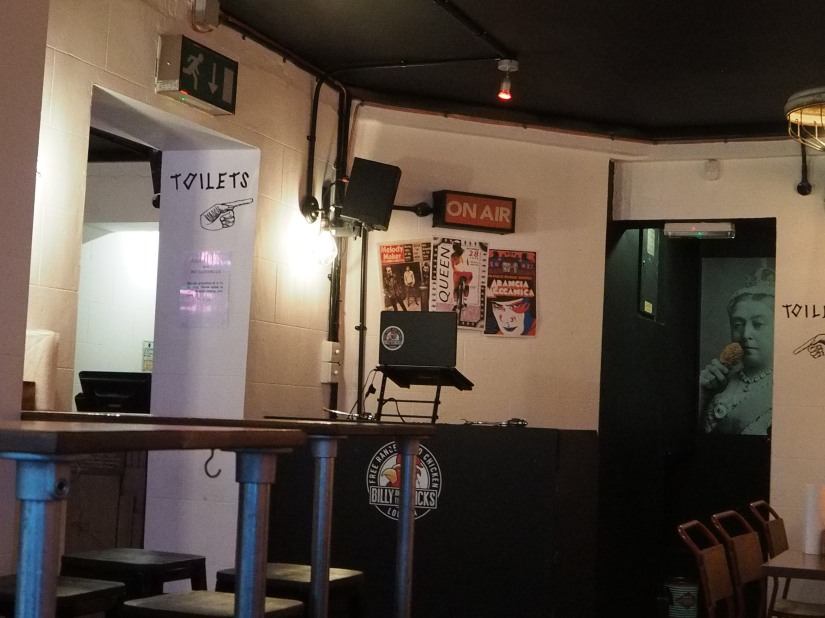 Most fast food places will want to turn their tables over quickly, but at Billy and the Chicks, we didn’t feel rushed.  It felt like we were allowed to enjoy and savour our food. The staff are friendly and very zen and I absolutely love the small touches like inserting the straw into the soda can tabs so the straw doesn’t float away.  To me that means that they think about the customer and what they can do to make the customer’s eating experience a little bit better.  It’s the little things that matter. 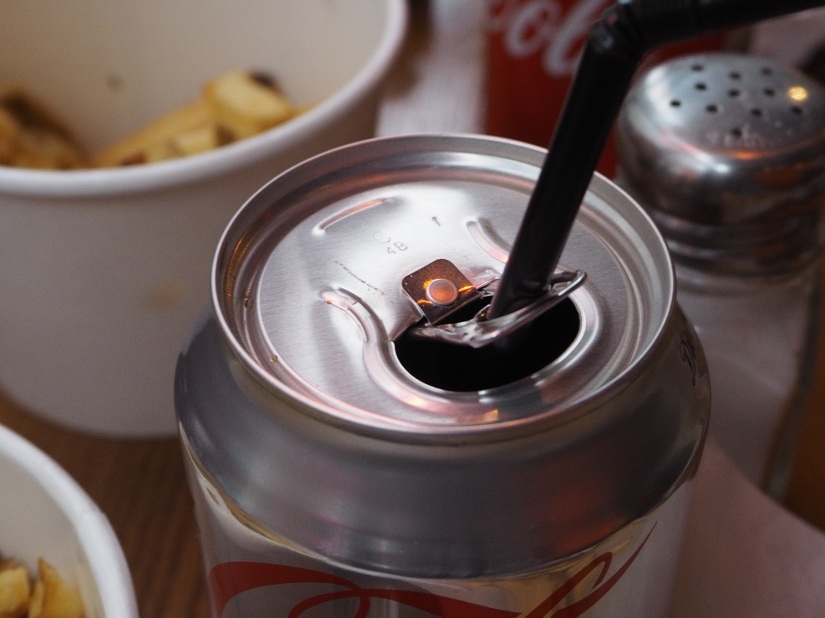 If you want really good chicken, the finger-lickin good kind, visit Billy and his delicious chicks! Even without vouchers, I would pay for the food full price, because it is definitely worth it!

There are a few things that make this life so much better.  One of them is barbecue pork on sticks Pinoy style.  I’m going to find out how to make barbecue Grill Queen style.  Grill Queen is a small independent chain that sells barbecued meat – pork, chicken, seafood…you name it, they probably barbecue it.

I haven’t quite cracked it, but the recipe I’m tweaking is nearly there.  I’ll be posting the recipe on the blog soon.

But for tonight, I am eating something comfortingly Filipino: barbecued meat, rice and sautéed vegetables!

It was a struggle to go back to work this morning and the day sped by so fast I nearly got whiplash!  But, that being said, after 10 days of not being chained to a desk (and my determination to keep my desk as paperless as possible), today was a good first day back at work! 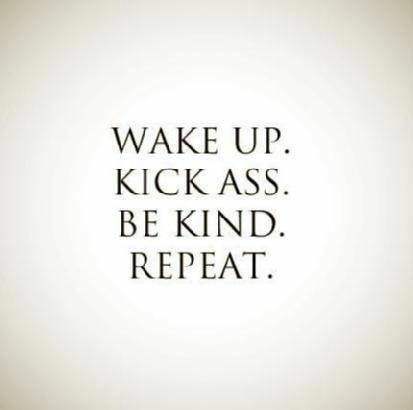 One of my goals in 2016 was to take better pictures.

On Instagram, apparently, I posted 386 photos in 2016.  Those 386 photos garnered an impressive 26,432 likes…apparently!  I must be doing something right!  And thanks to 2016bestnine.com I can present my 9 most liked snapshots of last year on Instagram.