No is such a difficult thing to say…at least for people like me who are people pleasers.  To me saying no meant I was letting people down, I was being selfish, I was being mean and I was being unhelpful.

I’ve had a lot of time to think about work, and learn about my weaknesses and how I can improve my performance at work.  It’s not necessarily a new epiphany, but it has actually hit home that I have to stop saying yes to everyone asking me to do something for them.  I have to choose the situations where I say yes.  Steve Jobs said it best when he said that “It’s only by saying no that you can concentrate on things that are more important.”

For a while, I lost sight of what I should have thought was important to me.  In my deep desire to be helpful to everyone, I allowed myself to take on too much.  I stopped taking care of me because I was too busy trying to be everything to everyone.  But the universe does look after you.  I realised, in the nick of time, that this was a habit that I had to stop.  I had to concentrate on me, what I thought was important.  I realised that if I took care of myself, and what I needed to do first, I would be in a better position to help others.

I also learned that saying no can also be a wonderful teaching mechanism, especially at work.  I find it hard to refuse anyone who asks for help, especially in circumstances where I know I can.  I’ve learned, though, that sometimes, it’s not always up to you to help.  Sometimes you have to step aside so that you allow people to do their job.  Sometimes, even if it takes longer to teach people than to do the job yourself, it is still best to teach them how to do the task instead of taking the task away from them.  If you take the task away, you take away the learning opportunity.

It still pains me to say no.  But I’m working on putting myself first.  I wasn’t raised to think that it was okay to take care of Number One first – Number One being myself.  But now I’m beginning to realise that there is wisdom in putting oneself first.

Saying no is good.  It gives you the opportunity to say yes to something even better. 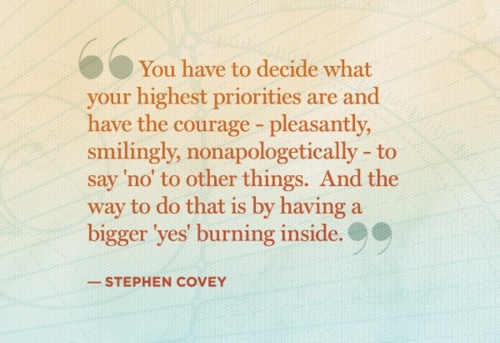 3 thoughts on “No is really okay”