Char siu in puff pastry…in my head it was going to work.  But I think I need to read up on how people do this so that I can see where I went wrong and adapt my recipe.

The filling works though so that’s one thing that went right! 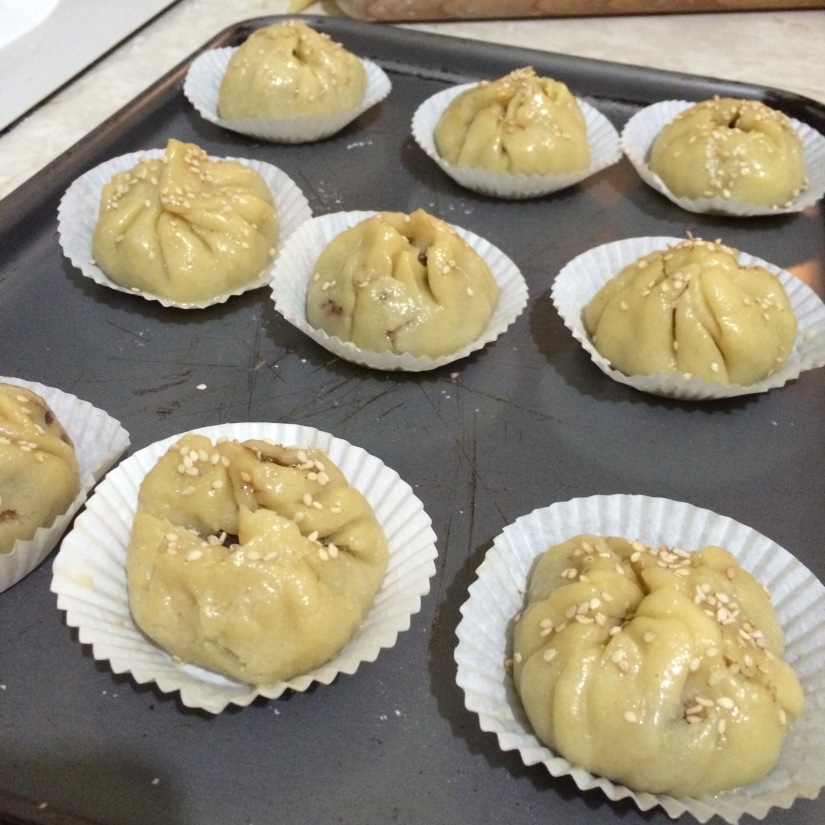 I’ve told myself that I need to write more.  And I am.

My idea of chilling on a Saturday is working in the kitchen — at the pace that I set for myself.  I’ve managed to clear the dishes from the meals of the past few days (yes, I can be quite the slob when I have my über slow days!) bake a batch of chocolate cherry cheesecake brownies and bake a small cheesecake (leftover batter from the brownies!).  The next item on the list of things to do today is make lamb kofta kebabs for dinner.

I had a lovely lunch though.  No cooking involved at all.  Just opening packets.  Packets of delicious goodness!  My lunch was a cheese plate lunch.  It was filled with all my favourite things: pâté, chutney, Stilton cheese, Red Leicester cheese, a mature Cheddar cheese, Milano salami and cream crackers and oat biscuits!  It was yummy and relatively lighter than any lunch I’ve had the past few weeks leading up to Christmas and the bonus bit was this was all under £10 (plus I have enough leftovers to feed at least 5 more people – you gotta love post-Christmas food sales!)!

It is now after 5PM and I need to start on my kebab mix!

I hope everyone’s had a brilliant Saturday! 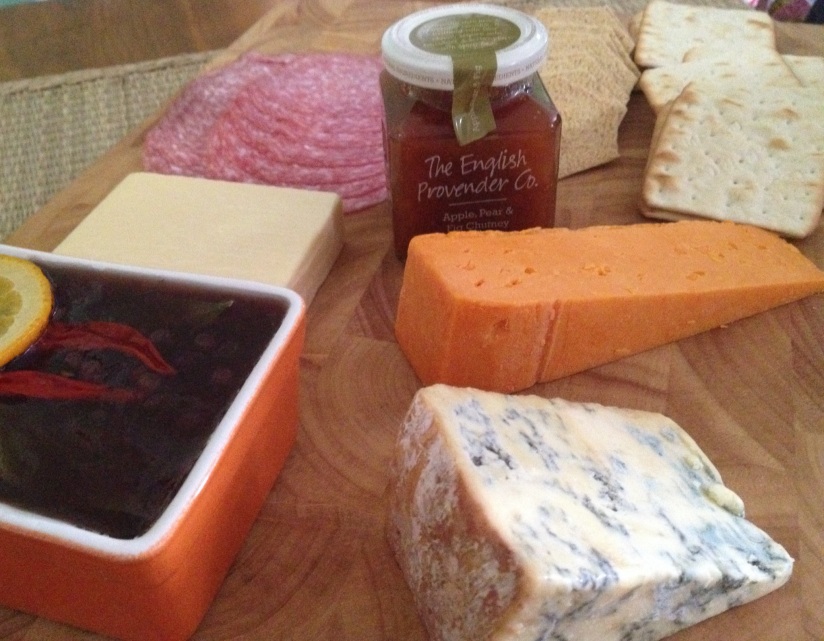 I went through a phase of craving bubble tea.  Bubble tea is a tea-based drink very popular in Taiwan and its Asian neighbours (there is a milk tea/bubble tea revolution in the Philippines, if my friends’ Facebook and Twitter photos are to be believed!).  If you’ve never had bubble tea (where have you been?), think your typical cup of tea mixed with a milk shake (it’s served cold) with tapioca pearls sucked through a big, fat straw.  There is a myriad of flavours but my favourite is the taro milk tea (in the Philippines, I used to have mine with taro pudding which is basically taro jelly).   And since most of the bubble tea bars are in London, I had to find a way to satisfy my craving.  It wouldn’t have been financially responsible to run down to London everytime I had a bubble tea craving.  So I bought taro milk tea powder, the straws, oolong tea and the tapioca pearls.

The taro milk tea powder comes in 1kg bags so after a few sessions of taro milk tea indulging, I still had more than half a bag of the taro powder!  So I had the brainwave of making a taro-flavoured chiffon cake.  It was all an experiment so I wasn’t sure it would work.  After the mixture was put together and I put it in the angel food cake pan, I looked at it with a lot of trepidation!  The colour wasn’t as deep as I wanted it to be so I was VERY worried! 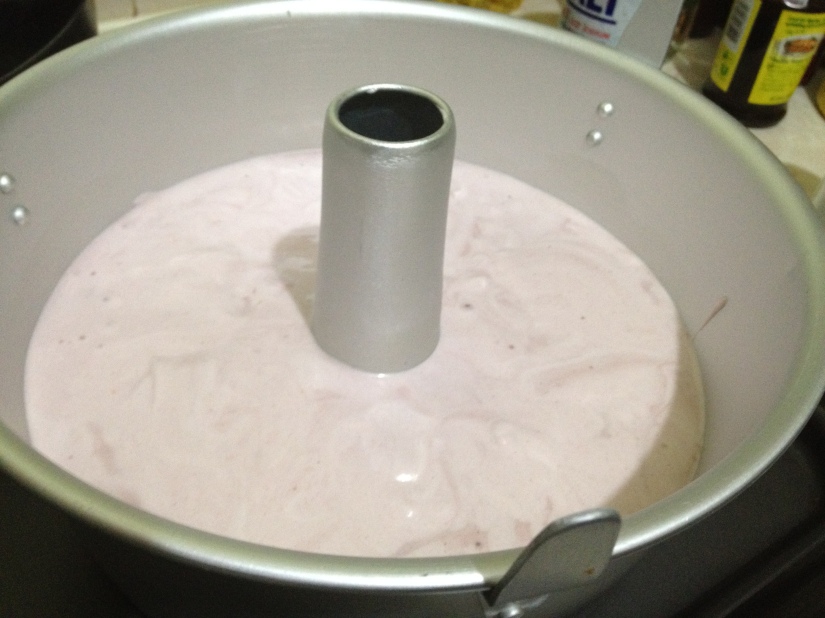 But after the baking time, it came out and it was quite the yummy and light little thing.  It’s still a bit unstable (probably owing to underbeating the egg whites!) and I want a deeper taro flavour, but it was a good start.  What surprised me most is how the colour deepened as the cake baked!  I’m looking forward to tweaking the recipe and having it come out all lovely and lilac! 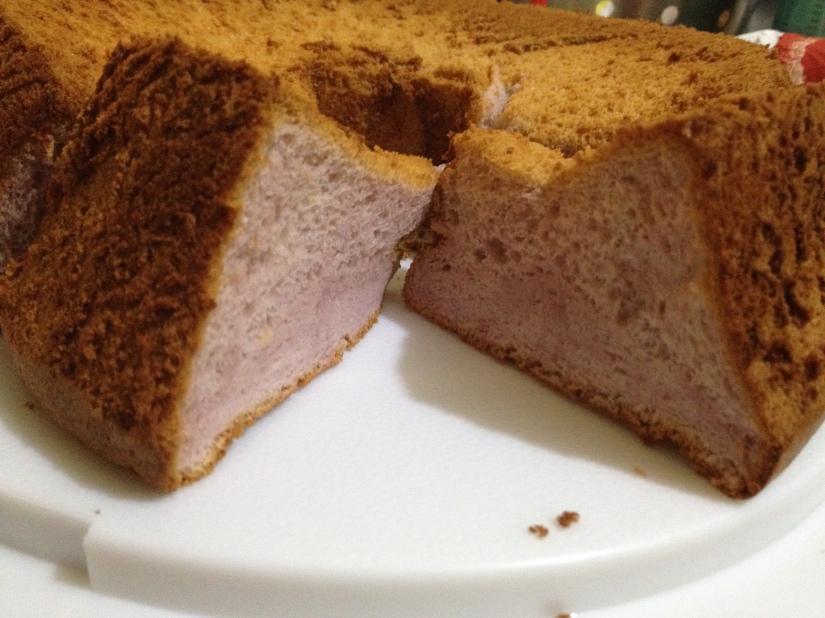 I’ve been meaning to make a tea loaf for ages.  I fell in love with the Yorkshire Tea Loaf that used to be available in the supermarkets (there are other tea loaf brands but I did love the Yorkshire Tea loaf the best).  Apparently, it was no longer cost effective to produce the cake.  I think I’m not the only person who was absolutely gutted to no longer find this particular cake brand on the supermarket shelves.  They had a very good thing going and it’s very sad that they chose to pull the product instead of resize it.  Resizing the loaf would have been more acceptable to consumers like me who loved their cakes!

I have been getting over a lingering bout with a certain nasty virus but today has been a really good day (albeit the cotton-woolly head still).  It’s quite a good thing because I do want to go back to work and I’ve taken too much time off work for my peace of mind!  I thought I’d try my hand at a new recipe today.  Mind you, I did bake custard creams yesterday for the first time and they turned out great.  As a personal rule, I don’t necessarily bake when I’m not 100% because I kind of feel like your food reflects your well-being so I think that if I’m not in the best of moods or health, my food reflects it.

I may have overbeaten the batter a bit too much which might explain why the cake is a bit too crumbly.  But the taste is wonderful.  I may have to tweak the recipe according to my preference because I do love a dense tea loaf.  I got the fruity tea loaf recipe from the Good Food website.  They call it a tea cake, but I’ve always thought a teacake is a marshmallow on a biscuit covered with chocolate!  I’ve always trusted the recipes on there, I’m sure a few tweaks to fit personal taste is welcomed!  After all, we’re all allowed to make food our own as we are going to eat it! 🙂

As exercise go, I think my first tea loaf went well.  I think it might work with my no-fail loaf base.  I will probably work on the tea loaf recipe again soon.  Which is good because I’ve still got dried fruit and mixed peel left! 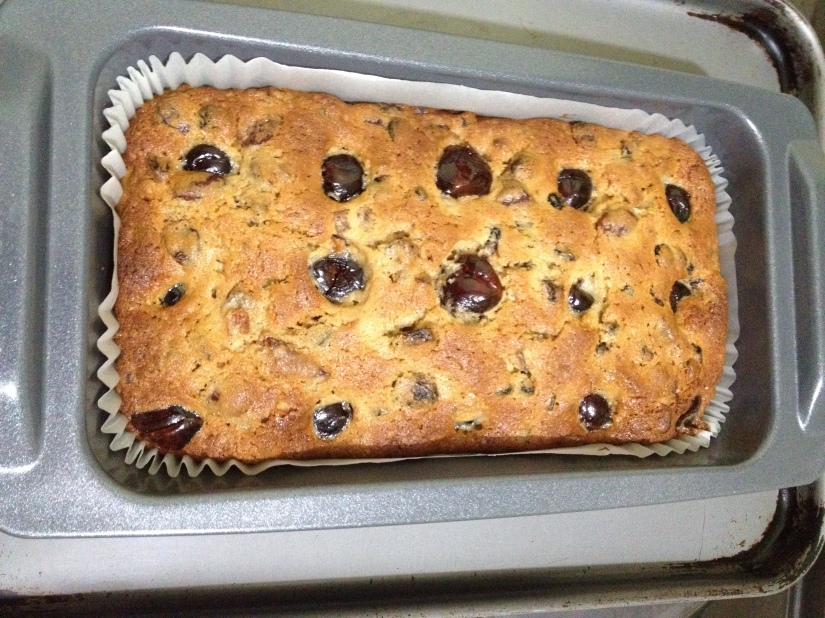 Cooking and baking has become a way for me to reconnect with the food that I loved to eat in the Philippines.  Since moving to the UK, I’ve had to rely on my food prep skills instead of having my mum cook my favourite dishes for me.  I’ve always loved it and cooking and baking were my creative outlets.  It always made me smile when people said that something I made was really good.  But when I was in the Philippines, cooking and baking the dishes I wanted to prepare was more frustrating than relaxing because I couldn’t get a lot of the ingredients that I needed.

Things have changed though since I moved to England.  I can now attempt most of the recipes that I’ve been wanting to try because the ingredients are more accessible (it’s the Southeast Asian ingredients that are now not as accessible as they were in the Philippines! Ha!).  As a result, my cookbook collection has grown to a 32-strong contingent!

This year, the resolve is to actually USE my cookbooks and cook or bake 1 recipe a weekend.

I decided to start with a custard cream recipe from Jo Wheatley’s book A Passion For Baking.   I’ve been reading a lot of good things on Twitter and Facebook about Jo’s recipes.  Jo Wheatley was the winner of the second season of the Great British Bake Off.  I must admit that it was because of the GBBO shows that I took up baking again.  Before that I would just bake the occasional cake or cupcake but now I’ve been reading up on baking techniques and expanding my baking repertoire.

Jo’s custard cream recipe is great.  She breaks the down in stages and the preparation instructions are easy to follow.  I had to chill my cookie dough though for about 30 minutes instead of the suggested 20.  As each oven is different, I baked my biscuits for 15 minutes instead of the prescribed 10-12.  They weren’t golden enough.  But once out of the oven, they smelled heavenly and the biscuits were lovely and short!  What I loved the most is that the recipe page is laid out in two columns.  One column has ingredients and the suggested equipment that lets you prepare them before you start baking.  The other column has the preparation directions.  It was so lovely and organised!  I try to be organised in the kitchen becaused I think the trick to cooking and baking well is being organised.

My cookies are lovely and golden and what I appreciate most is that it doesn’t have as much sugar as I thought it would.  Being a diabetic means that I have to limit my sweet treat moments and unfortunately for me, custard creams are a guilty pleasure.  Maybe now I can develop a custard cream recipe that is more diabetic-friendly!  But the best bit of the recipe is that it makes about 20 biscuits which makes 10 custard creams.  They are moreish but at least there isn’t a lot scoff down!  Ha! 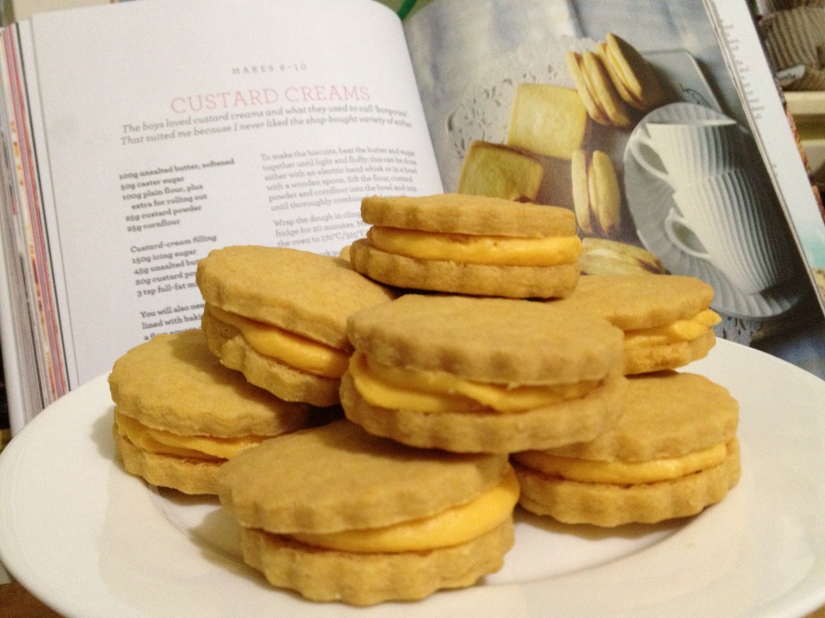