I’ve been feeling under the weather for quite a while now and I’ve been battling this illness for a few weeks now.  Lurgy has been making its rounds in the office and so far, I’ve not gotten sick (knock on wood) except for sniffles and the occasional coughing fit.  But since Friday, I’ve been feeling really poorly and since Sunday night have not been able to sleep.  In 72 hours, I’ve only had about 7 hours of sleep in total, I think.

Baking has always been cathartic for me and I’ve always felt better after baking.  So last night, after Alan helped with the fruit prep, I made pear and apple crumble.  I was hoping that it would do the trick.

Not quite.  I woke up this morning – and I use the term “woke up” quite loosely as I only had about an hour and a half of sleep last night.  So tonight, it’s banana oat spice muffins. 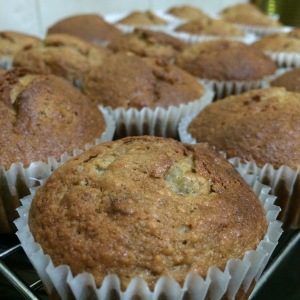 Let’s hope tonight I can catch some sleep.

To sleep, perchance to dream…well, maybe not dream as I’ve been having nightmares lately.

3 thoughts on “Baking for medicine”