I’ve always had music in my ears ever since I could remember.  It started with my father having these huge headphones (which funnily enough would have probably been de riguer these days) and I started listening quietly these Hebrew children’s songs that my dad used to play on constant repeat so that we would speak Hebrew (apparently, I was fluent!  How I wish I still were!  I can sometimes understand the Hebrew and I remember being so happy that I didn’t necessarily have to read the subtitles when BBC showed The Honourable Woman on telly! Yep, high point in my life.  I love being such a geek!).

Then in 2014, Alan introduced me to Serial, THE PODCAST.  Along with the rest of the world, I was hooked!  I would listen to the episodes twice; once to listen to it as soon as it became available to download and listen to, and then again later in the week, before the next episode came.  It was great because Sarah Koenig spoke like me (I’m Filipino but I’ve always had a decidedly American accent – which made working in call centres decidedly easier since they required someone with an American twang!  My dearest dad flatly refused to allow us to speak in Filipino or watch Filipino shows.  Even my nanny spoke in English to me!  Oh and no, having a nanny in the Philippines did not mean we were rich.  It was just an acceptable thing to have in households with two working parents.  It was the only acceptable solution really.).  After Serial finished, I went back to listening to my music playlists.  I did miss someone talking in my ear.  So imagine my joy when Serial released their second season!  But of course, once the podcast is finished, it finished.

I started exploring the podcast world and found a lot of interesting listening available.  I listened to Richard Herring a lot for a while, except that it became a bit too sweary for me (I use the occasional expletive like “sh*t, sh*t,sh*t, oh sh*t”, or “f*ck!” or “bugger, bugger!” but even I surprise myself when I say them out loud.  Alan says I swear a lot, which probably means I feel so comfortable around him that I say what’s on my mind…even if it is a swear word!) so I stopped following his podcast.  I also listen to The Allusionist podcast because I love listening to people talk about etymology and language (and yes, because I’m a bit of a grammar monkey!).  Once in a while, I download No Such Thing As A Fish podcast episodes because I am a QI fan!

These days though, my train rides are entertained by 3 amazing women:

I love Emma Gannon’s podcasts because whilst I am not a millenial (I think in the timeline of generations, I am a Generation X-er, only just), her insights and the insights of her guests are inspiring.  Emma’s podcast Ctrl, Alt, Delete introduces her listeners to a diverse line up of creatives and successful people who have made social media their playground; people who have created niches in the social media world and aren’t stingy with sharing their experience and knowledge to people who want create their niche in this rapidly growing platform.  I realise that talking about Emma so much might made me sound like a sycophant (I don’t really care if I do!) but she is amazingly brilliant and the people she talks to are equally so.  It’s perfect listening when you want to stop hating your journey to work, perfect listening when you want to get inspiration to make a difference, perfect listening when you need to refocus and understand that your current job will probably be a means to an end – the end being doing something that you really, really want to do!

Another lady I love listening to is Dawn O’Porter.  Dawn was also a guest on Emma Gannon’s podcast and I soooooo enjoyed listening to that episode.  It was very laugh-out-loud and I must admit, I did get strange/annoyed looks from people sitting near me on the train because I was constantly snorting, laughing into my sleeve or making funny faces.  Dawn has this very easy-on-the-ears voice that makes you just listen.  I was so happy she started her own podcast Get It On by Dawn O’Porter (I know you can get it on iTunes and acast..and I think, PodOmatic).  I loved the trilogy on men’s style that she had.  She talked to Jason Segal, Dermot O’Leary and her husband, Chris O’Dowd, about their sartorial choices.  I blame you entirely Dawn for the looks I got from that man who gets on at Colchester.  He was very annoyed with me because for several days, I interrupted his relatively quiet train journey! 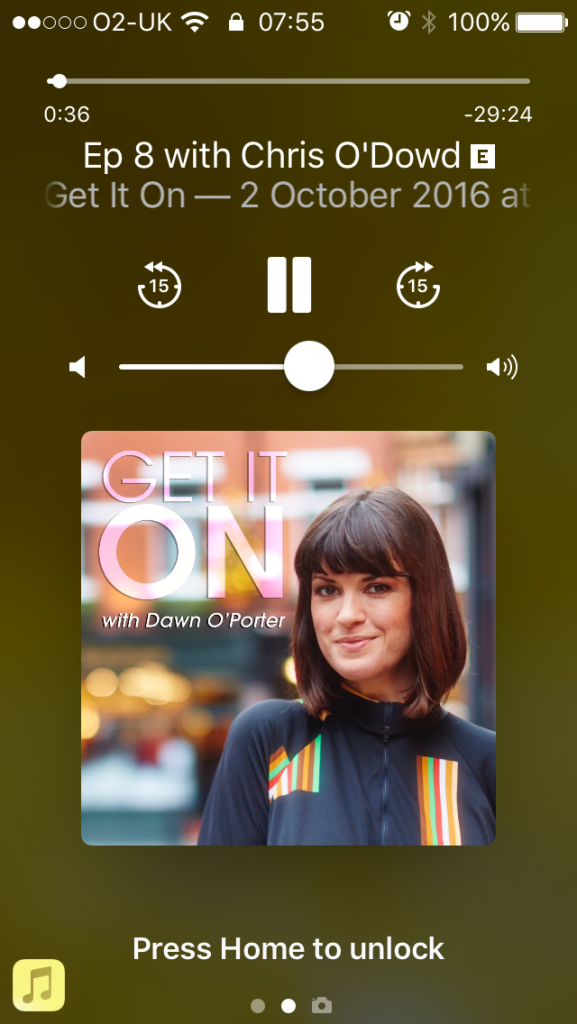 I’ve only just VERY recently discovered Sofie Hagen.  My introduction to her Made of Human podcast was her conversation with one of my favourite comedians, Sara Pascoe.  I first listened to her this morning and let me tell you, it was another LOL journey.  Sorry Mr Sourpuss Colchester.  It was just too funny. Also, I’ve taken away a few, very cool, quotes that Sofie and Sarah shared during their conversation:

From Sara:  “Don’t find happiness where you lost it.”

When I heard this I was slightly blown away because for some reason, it fit the situation I was struggling with (it was mostly about relationships that didn’t really matter anymore and that I shouldn’t feel guilty about not liking people – I will probably write about that at some point!).

Also, the nerdy chick in me will read about something Sara Pascoe talked about: the zero-sum game.  Have you heard of it?  Want to discuss it?  Wait, no, not yet!  I’ve got read up first!