Given the choice between beef, poultry, pork and seafood, I would choose poultry over pork, then seafood then beef.  Beef is probably the best source of protein, but I would chicken over most meats any day.

In the last quarter of 2014, I wrote about my Chicken Bucket List.  It was a list of up-and-coming places to eat that specialised in chicken that I wanted to try (the London food scene is alive, well, vibrant and varied!).  I must admit, the underlying criteria was that the places needed to serve some sort of Southern fried chicken-style dish.

It was their claim that they “served the best free range fried chicken you’ve ever tasted” that drew me to wanting to try their food.  I mean it’s a very brave and bold claim certainly.  The people at Bird must trust their food that much to make that sweeping generalisation.

I went to the Shoreditch restaurant and got there fairly early (I had misjudged how quick it was to walk from Liverpool Street station to the Shoreditch location – clearly I did walk faster than I thought).  So anyway, I was cool with having to wait outside and sit on the benches situated outside the restaurant.  It was fine.  Besides, Shoreditch is a very interesting place and there will always be something to see.

So when the restaurant finally opened (nearly 45 minutes later than what was on the doors), my tummy was rumbling excitedly.  I love Southern fried chicken, and while I cannot claim to be an expert, my Spit and Roast-inspired buttermilk fried chicken is really good.  Bird was one of the very few places at the time that served chicken and waffles.  I was hoping to get gravy and maple syrup.

The space was okay.  Nothing too styled, it was clean and not cramped, if a little dimly lit (it was located right next to a bridge, almost under it, so I wasn’t expecting a space awash with light!).  The decor was kitschy but cute, with framed caricatures of chickens. 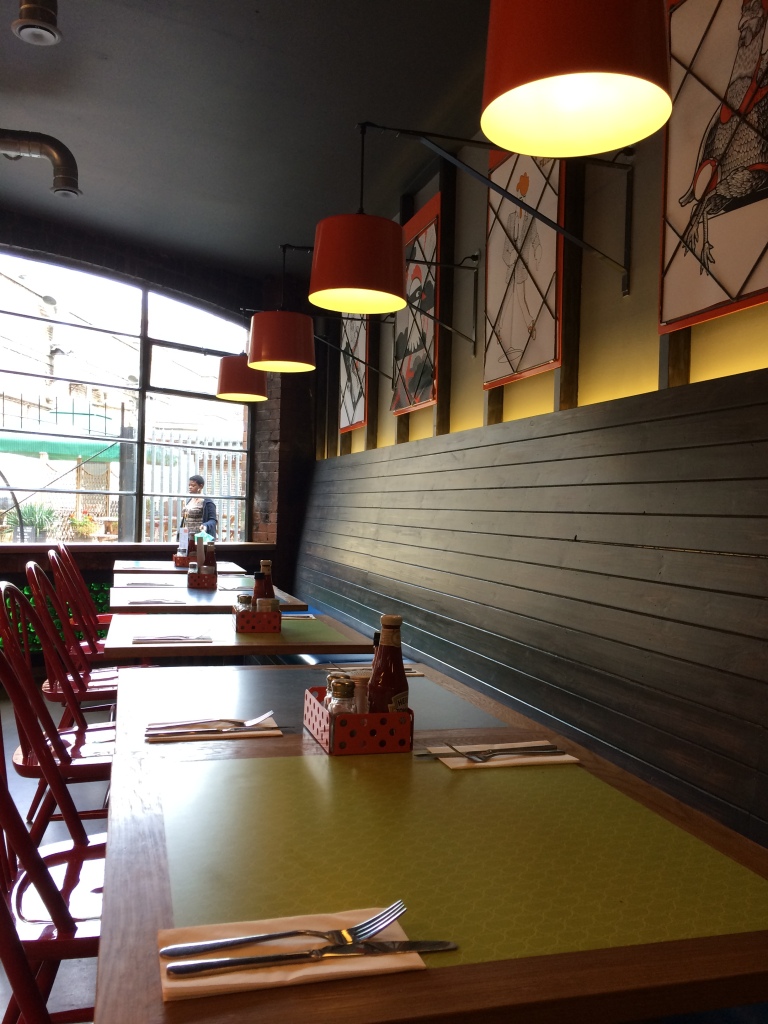 The staff were nice enough, seating us in one of the table-chairs-banquette spaces that was nearer the Bird doughnut hatch, on the left side of the restaurant.  It was quiet and I loved the fact that it was the quieter side of the room.  I was ready for a relatively spiritual experience.  After all, we were talking about chicken and waffles here!  So orders (from slightly smudged menus) were taken and I ordered what I came to order: fried chicken and waffles (I was disappointed that it didn’t come with gravy as I’d wished, but that was my fault because I didn’t check out the menu online before I went.  They didn’t have any gravy on the menu). 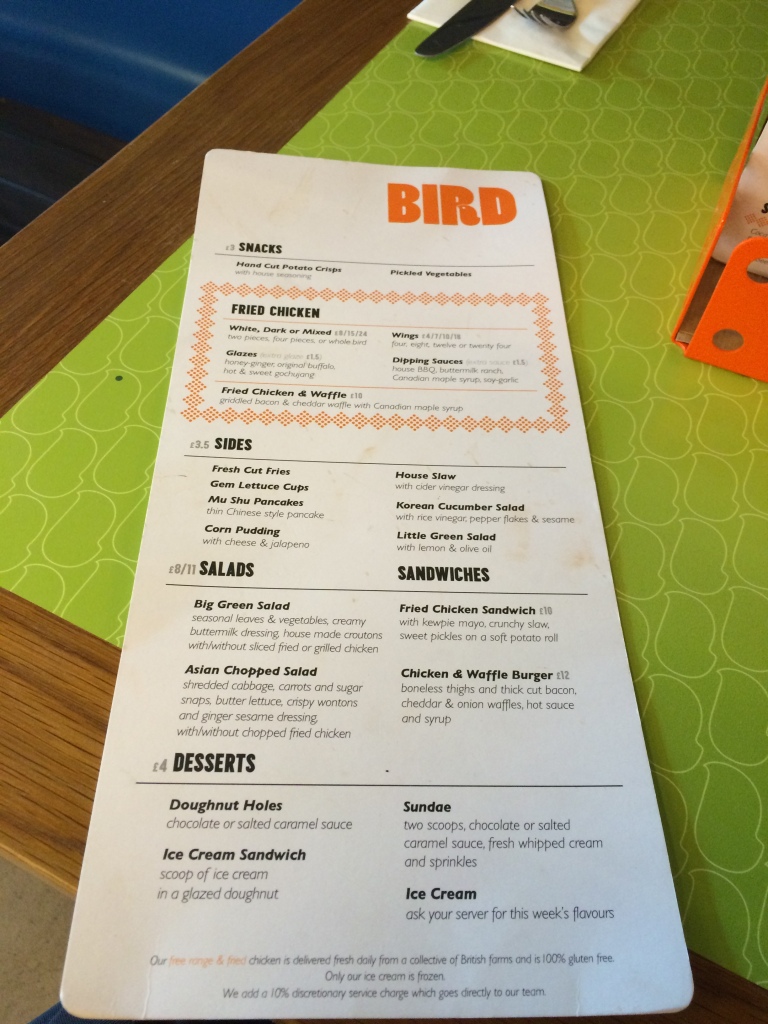 The service was friendly and efficient and soon, plates of chicken pieces and fresh waffles were slide in front of us.  I’m not sure whether it was just that it was the early hour or if it was just the location.  But my chicken looked wrong.  I know that they battered their chicken and they didn’t bread it, but I found it a bit awkward that the chicken piece I was given had a scaly bit exposed – don’t get me wrong, it didn’t affect the flavour, it was just not pleasant to see.  We do eat with our eyes as well.

It went downhill from there.  I visited their website that evening and it does say that their chicken isn’t Southern fried chicken.  It’s fried chicken.  Granted it is fried, but you do get succulent fried chicken.  My chicken was dry and overdone, painfully so.  I’m not too certain how the chicken is prepared, whether it’s brined or marinated in buttermilk, but my piece of chicken wasn’t battered very well.  The batter had a bitter aftertaste, probably signalling that it had been left a little too long in oil that was a little too hot.  Mind you, I’ve incinerated enough chicken so I wasn’t too fussed so much.  It was just that the chicken was so dry that it was quite a struggle to adequately make a dent in the two pieces of chicken that my two waffles were served with. 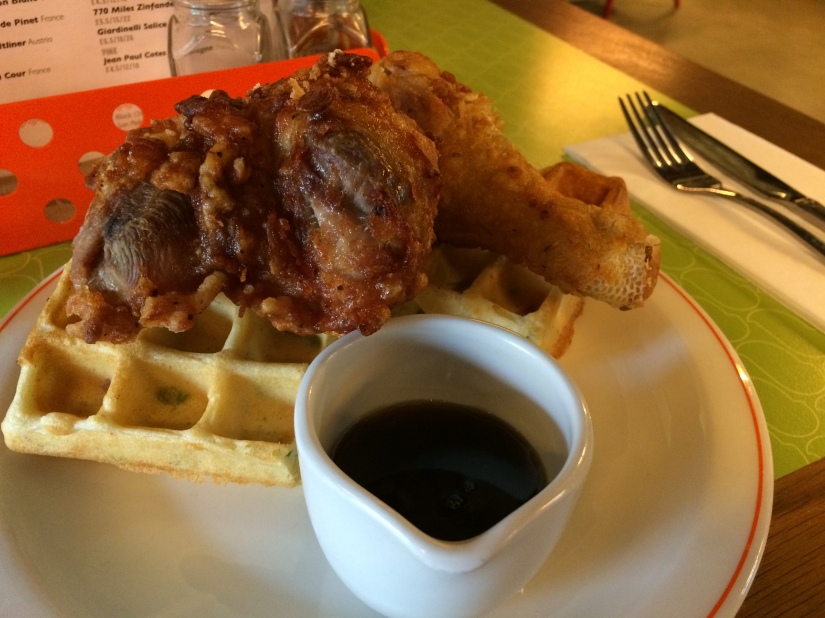 The waffles were really nice, if a little on the light and thin side.  I loved that it was more savoury than sweet with the addition of spring onions.  Usually the waffles, in my humble opinion, provides the sweet element, to the sweet-salty flavour combination (the salty element provided by the chicken).  It was a refreshing change to have a properly savoury waffle.  It was great to be able to drench it in proper maple syrup.  I must say that I would probably happier just having the savoury waffles and the maple syrup instead.  But the restaurant is meant to specialise in poultry (its name is Bird). 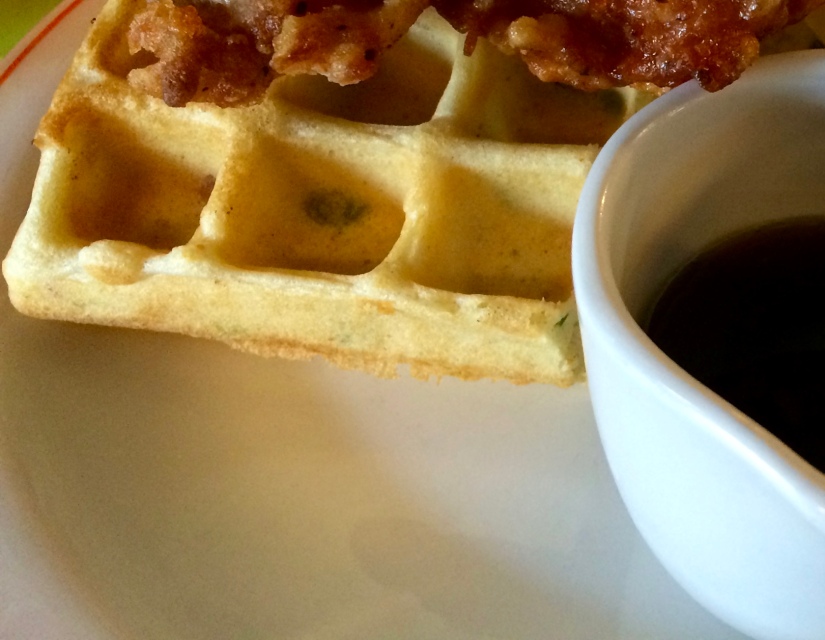 Sadly, for me, BIRD was NOT the word.

1 thought on “BIRD is not the word”