I rarely post political opinions on the blog.  But when I saw this article in the London Evening Standard whilst on the train last night I had to express my feelings.  For those of you still reeling from the disaster that was the US election, spare a thought for the Filipinos who lived through 20 years of the Marcos dictatorship. 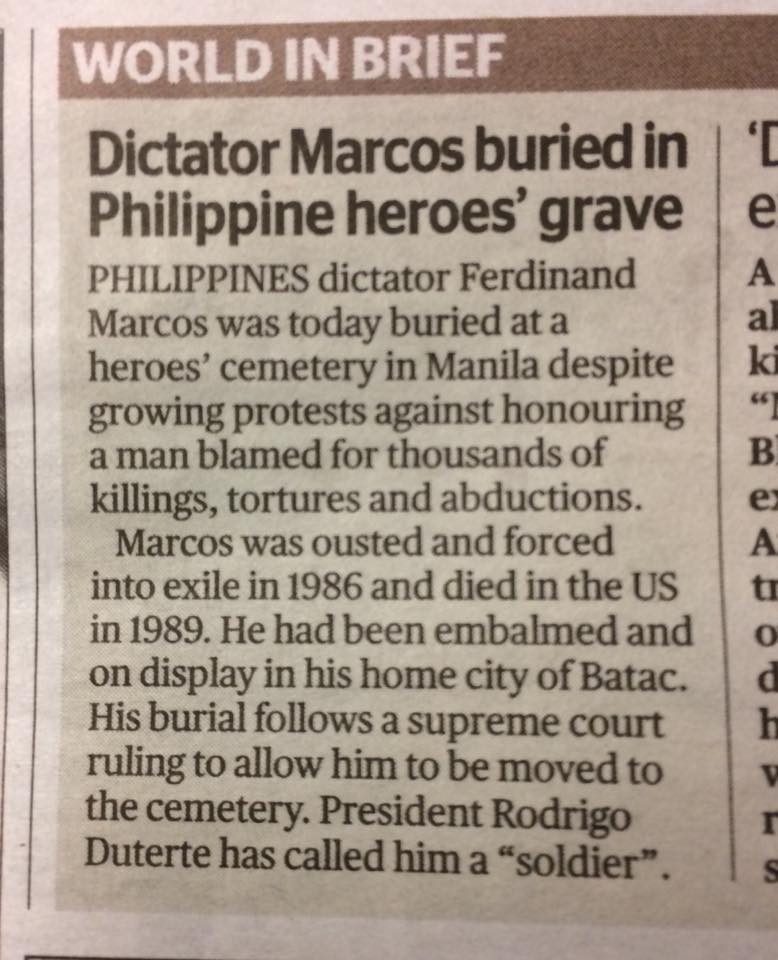 Yesterday, Friday, 18 November 2016, marks the darkest day of Philippine history.  Everything Philippine nationalists and patriots of the 1970s and 1980s fought for, suffered through and even died for, was negated.  All with one stroke of a shovel.  Because yesterday, with the support and approval of the newly elected administration and the irresolute Philippine Supreme Court, Ferdinand Edralin Marcos, dictator extraordinaire was buried on the hallowed grounds of the Libingan Ng Mga Bayani (Heroes’ Cemetery).

How could this administration allow this obscenity to happen?  This individual pillaged and plundered the Philippines, ensuring that generations suffered the consequences of his diabolical greed.  In return, he gets to be buried next to heroes who he isn’t even fit to be in the same atmosphere in, let alone share the same burial ground.

Did I miss something?  When did we start living in some horrible alternative reality?  When did our government side with dictators?  When did Martial Law become acceptable?  When did graft and corruption become admirable?

This isn’t some sort of two-month old, immature boyfriend-girlfriend relationship that fizzles out and everyone gets told to “move on” because it’s “for the best.” It is legitimately 20 years of oppression, where people are murdered, people who challenge the administration just mysteriously disappear, never to be seen or heard from ever again, where everything on TV, in radio and on print is censored and everyone is, essentially, deprived of human rights.  This has left so many people scarred.  And to those downplaying this part of Philippine history because it puts their president in a bad light, this isn’t some political horror story.  This really happened.  Those human rights violations really happened.  Those deaths and murders really happened (while there may not be any evidence, there are families still missing fathers, mothers, sons and daughters.  If this isn’t testament to that, I don’t know what is!).  Everyone in the world knows about it (for goodness’ sake Imelda Marcos and her 3,000 pairs of shoes are synonymous with corruption and greed!  What do you think the musical Here Lies Love was all about?).  I don’t understand how some people can say that it wasn’t that bad.  It was, and for many others, even worse than our worst imaginings!  I don’t understand how anyone can even downplay all the atrocities that happened between the declaration of Martial Law on 21 September 1972 and when, finally, Ferdinand Marcos and his family were forced to flee to Hawaii in exile in 1986.  How can this all just be swept under the rug?